Japanese catfish, or namazu, are popular fresh water game fish in many areas of Japan. You can find namazu even in a river at the center of a big city because they tolerate a wide range of environmental conditions.

Namazu are mainly fished during the warmer months of the year, especially in the summertime. Late evening is the best time to target namazu as they usually chase baits at night.

No other ways of namazu fishing is more exciting than what you get with topwater lures. The loud suckling sound and smashing splash will make your heart stop. If you have a chance to visit Japan, don’t forget to put some topwater lures in your suitcase. 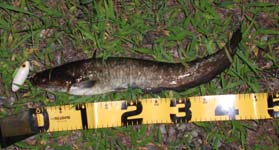 A middle-sized namazu caught with a Jitterbug.


Classic topwater lures such as the Arbogast Jitterbug and Heddon Crazy Crawler have been used for namazu fishing. Some topwater lures specialized for namazu fishing are recently developed by a Japanese lure company Smith. The Smith's products Catapy, Batapy and Namazy are uniquely designed to directly attach a small light stick for providing visual assistance at night. 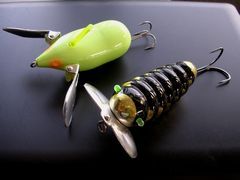 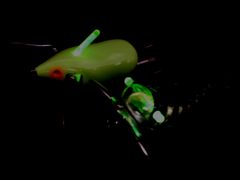 The Catapy has a concave lip which creates a attractive popping sound on a steady retrieve. Its huge caterpillar-like shape probably seems odd to many of you, but it reminds japanease guys of the legendary monster Mothra (larva) and attract them. The Mothra Larva once beat Godzilla with its silken spray on the epic movie Mothra vs.Godzilla 1964!

The Batapy has two metal wings that flap as they catch the water surface. The concept of Batapy shape is a little difficult to understand for me. It looks like an ugly mouse swimming with batterfly stroke. That is only a visual perception of a human but namazu really don't care.